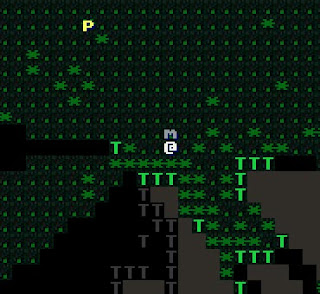 Today I was testing how the creatures should react to attacks. This is the first time I'm this far in a combat system. I never did that for Kaduria, because I have focused in complex world creation and the combat system of Kaduria will be different anyway. I think it will not have hit points at all, but Teemu certainly has them.

You can already hit and kill the enemies and they respond to attacks, but there is no movement or counter attacks yet. I created all monster types in one level to test the combat and it's easiest if they don't move around. It's tempting to add features in this stage, but I try not to do that. I'm free of high expectations for this project, it's not even supposed to be complex.

I started to make the power system, but then ran out of time. I'm keeping it in that two hours strictly so I don't get tired of programming. This seems to be the best idea I've had in times. The game may actually be ready in two weeks.
Posted by Krice at 05:51 3 comments:

This version has nice looking graphic tiles, but the graphical mode is unusable because the odd gameview size 20x5. So you get visibility of whopping 2 tiles in north and south directions. The ascii mode however has more visibility and it's better in terms of playability.

I don't know what happened to the gameplay, but when I allocate skills points to fighting it's almost impossible to die, at least in the dungeon at right side of the overworld map. I just went on and killed everything with few hits. If that is not easy enough, you have 20 aspirins in your inventory and they are good for healing your character.

Some of the UI decisions are strange, like when you need to input a number when digging (besides I tried it a couple of times and it didn't even work). The game is tediously asking you to press space or enter in every situation, but when you die it's possible to exit the game without seeing anything, because the direction keys are now "any key" that quits the program.

The dungeon is very boring with lots of dead ends and predictable layout of rooms and corridors. I don't know what you should be doing in the dungeon, maybe kill everyone?

I don't want to sound too negative, but the way the graphics mode has been destroyed is epic. In top of everything the tile height is two times the width. Why? Tiles should be square sized and preferably the gameview too.
Posted by Krice at 04:14 3 comments: