This version is old and there are new ones, but I wanted to write something about it since today I felt like playing something and found this one. NH4 is the other new version of Nethack, the another one is UnNethack.

NH4 opens a big screen full of information. The inventory screen is visible as side window. It's ok I guess, but can make the screen look more complicated mess of characters. The first problem I noticed was clipping of fonts. It must be a result of pseudo-console code, since real console never clips like that. Or it may, who knows. The programs looks a lot like console window, because you can set fonts as if using a console. Setting them smaller fixed it.

Keyboard commands in NH4 are somewhat different than in "my" classic Nethack (3.4.3). Kicking is 'n', but it doesn't even work. You can change all keys the way you want by opening Options, then hitting shift+I for keyboard command list. The default has hjlk-keys for movement which takes away 'k' as kick and others as well ('l' as loot). I really don't know why that should be default, because 95% of people who ever used hjkl-movement have died in old age by now.

I don't know why they changed AC to something else. In fact I didn't really pay attention to RPG system, have they changed it? The AC seems to be some kind of protection value with only positive numbers which is bananas.

Other than that it seems to be a regular Nethack, only with more bugs. Well I found one bug, but it was really strange. When hitting a floating eye I got this: 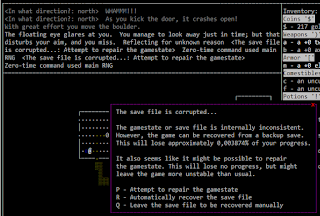 There was no save yet, since I had not saved the game. Maybe there is some kind of temp save and the final save game also went to... somewhere. Not in the game's directory. I hate when the program saves stuff to somewhere. In this case I didn't even find anything from AppData or those locations typical to Windows 7. Where the heck it saved the game? In registry?

It's really funny when people try to maintain the bullshit source code of Nethack and only manage to create more bugs. When will this end? What every Nethack variant programmer should do is completely restart the source code possibly not even using C or C++. The source code of Nethack is so bad and taking huge amount of time to fix bugs which keep increasing. The thing is that you need a better way to manage this kind of data and actions between them.

Not only that, I think NH4 also managed to make the user interface worse while developers should really concentrate to fix that shit if they want to create a better Nethack. For instance there should be a list of extended commands when you hit # and let player select from that list directly with a letter. Keyboard commands should be listed by category, so you don't have to scroll the entire list to find something. I could go on forever.

None of this would have happened if the Dev Team had not abandoned Nethack. I think it's time to let Nethack become history.
Posted by Krice at 05:40